Skip to content
Mobile app churn: what is it and how can gamification help prevent it

Mobile app churn: what is it and how can gamification help prevent it 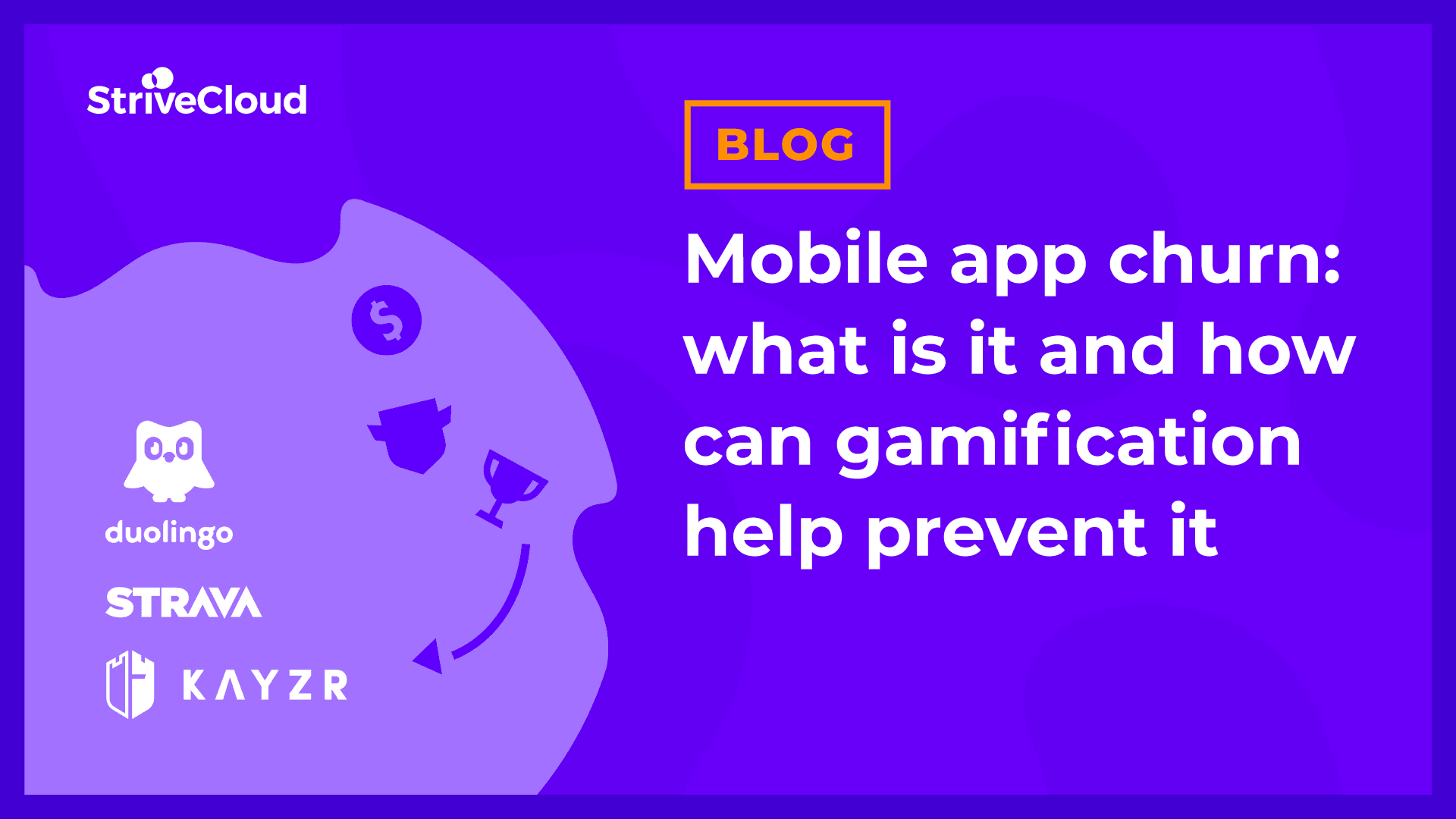 If you want to be successful as a brand, getting enough attention from your audience is key. Many businesses are launching apps to get this eyeball time, but lots of them are also failing at keeping consumers engaged. Why? Because they are either not tracking their mobile app churn rate or aren’t trying to solve the issues that cause mobile app churn.

App gamification is a great way to reduce churn and save money and resources on attracting new customers.

In this article, we’ll give answers to the following questions:

It goes without saying that competition between brands to have their apps end up as one of the favorites of users is fierce. And your audience isn’t making things easier, that’s for sure. A mere 24.9% of users revisit an app the day after download, recent stats by mobile app analytics and marketing platform Loyalitics show. You thought that was harsh? Well, sit tight: that number drops to 9.4% after 2 weeks. 3 months after the download, more than 70% of app users will have churned completely. 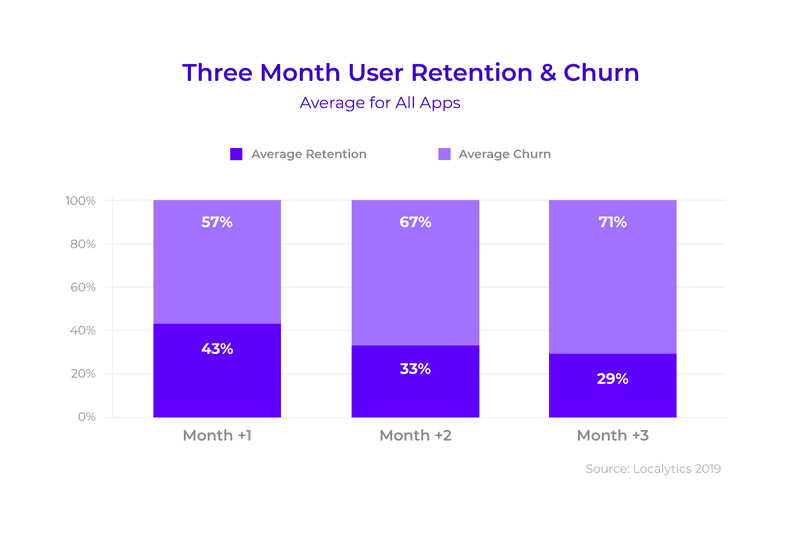 What is churn and why does it matter for mobile apps?

Churn refers to the number of users who stop using your app during a given time period. Why should you care about losing users? Because it suppresses growth. Think of your user base as a leaky bucket. With users dripping out, you’ll have a harder time trying to “refill” it with new ones.

Many companies overlook churn and assume that bringing in more new customers will cancel out its effects. Reality check incoming: a high churn rate is unsustainable and has compounding effects over time.

Even a small churn rate can have a major impact on your revenue over time. And while churn is inevitable—you will lose users, there’s no way around that—it is a key figure to track and keep as low as possible if you want your app and brand to be a success in these digital times.

Here are some key numbers why:

In fact, churn can learn you a lot about your brand, product, or service, like problems with product/market fit, onboarding, pricing, or customer expectations.

How do you calculate mobile app churn?

There is more than one way to measure your churn. In the case of app usage, it’s best to look at the percentage of users lost in a given time frame. The formula for calculating month-over-month user churn, for example, is:

Let’s make it a bit more tangible. Say you’re a shared mobility provider and you have an app people can use to book an e-scooter. At the beginning of the month, you had 1,000 active users. In the end, your stats show you had 800 active users. This means that you lost 200 users, which breaks down to a 20% churn rate.

If you like crunching the numbers, you can take it one step further and look at revenue churn, the revenue lost to app churn during a given time period.

Why do users churn from mobile apps?

Many causes can lead to churn, and often it’s a combination that pushes a user to churn. That being said, let’s look at a few of the main reasons.

For a user to continue using your app, it must do what he expects out of it. So in the case of our e-scooter provider, if the user for example can’t easily locate the available e-scooters near him, he might stop using your app and services altogether.

According to research performed by Clutch in 2017, 33% of app users get highly frustrated when the onboarding – the process of setting up an app for the first time after downloading it – takes them longer than 2 minutes. And with this frustration, the chances of abandoning skyrocket. In other words: you have a 120 seconds window to onboard your mobile users or lose them. Maybe forever.

#3 Different generations have different expectations in terms of user experience

People of different age groups spend their time on mobile phones and in mobile apps differently. Reaching the number of 2.5 billion in 2019, Generation Z has now become the biggest demographic group. And while they may not have the most spending power (yet), it is imperative for brands to try and engage these users.

How can you stop or prevent users from churning?

When it comes to keeping people engaged, you have to capture their attention and motivate them. That’s exactly what you can achieve with app gamification. Achievements, experience points (XP), levels, leaderboards, and other mechanics from the world of gaming are enabling the very best non-gaming apps to maximize user engagement, revenues, and retention.

By integrating game-like mechanisms and, in doing so, appealing to people’s competitive nature, you can nudge them towards the actions you want them to take, over and over again.

If you’re not at least considering integrating gamification mechanics into your app, you risk losing users to competitors and seeing churn rates go up!

Here are just a few examples of apps that are doing their best, with a closer look at some of their top gamification features.

With more than 300 million users worldwide, Duolingo has successfully made language learning fun. Pretty much the entire learning experience is designed as a game. All with the purpose to prevent app churn.

Each time you complete lessons or practice sessions in Duolingo, you earn XP. Earn enough, and you’ll level up in the respective language, which in itself is gratifying but also gives you something to boast about to your Duolingo friends.

What’s more, when you meet your daily XP goal for consecutive days, you start (or extend) a streak. Your streak is prominently displayed whenever you’re in Duolingo, in the form of a fire icon with a number next to it.

Strava is used by many professional athletes and by more than 40 million amateur sports enthusiasts to track and analyze runs, bike rides, swims, and other popular outdoor activities.

However, the core tracking and analysis features aren’t the main reason why Strava is such a success; there’s a bunch of other apps that do the same thing, and few are doing as well as Strava.

The secret ingredient is motivation. As a user, you can set a weekly or annual mileage goal. Strava’s data visualizations encourage you not to fall behind and are a powerful motivator not to skip tonight’s run.

Another one of Strava’s tactics to keep users engaged is that it developed itself into a social platform. You can, for example, follow friends’ activity and comment or give “kudos”.

The team behind Kayzr, the largest esports community platform in the Benelux, teamed up with StriveCloud to grow its user base without losing esports fan engagement or increasing spending on retention.

To minimize churn rates as much as possible, the StriveCloud team created a lottery system to spark users’ curiosity and secure scalable engagement. Users receive lottery tickets for actions like leveling up, ranking, or for winning badges. They can even bet on certain rewards on tradable collectibles in the online shop. The anticipation in itself shows to be an impactful dynamic. 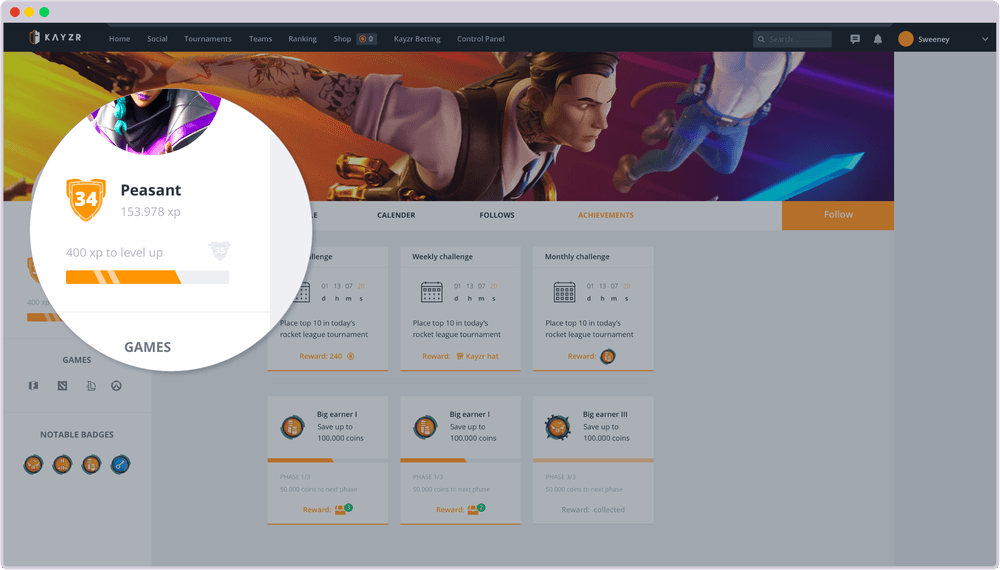 Next to the league and lottery system, Kayzr added a few other mechanisms to ensure churn was kept to a minimum. For instance, to give all participants a fair chance of winning in the new league system, StriveCloud added “game fuel”. With that fuel, users could play to rank. Once they run out of fuel they can still continue playing, but their scores won’t be added to the leaderboard.

Read the whole story and discover how Kayzr managed to gain over 350% more users in just a couple of weeks!

Table of Contents
I. What is churn and why does it matter for mobile apps?
II. How do you calculate mobile app churn?
III. Why do users churn from mobile apps?
IV. How can you stop or prevent users from churning?
V. Wrap-up
Go to Top