Skip to content
Engagement breakdown: How Manchester United is doubling down on digital fan engagement during COVID-crisis

While all live competitions are away, digital engagement comes to play! We’ve seen lots of sports clubs adapting to keep their fans engaged. But what can you do to drive fan engagement and create sponsor value in a non-intrusive way?

We’re starting a new series in which we breakdown how some of the most successful sport clubs in the world handle fan engagement during Corona. The goal is to gain an understanding on how these brands engage their fans, especially during the COVID-19 shutdown.

Today we’re diving into the fan engagement strategy of Manchester United, one of the biggest football clubs in the world with millions of fans from all around the world. United is a leader when it comes to digital engagement. Chief executive Ed Woodward has been focused on stacking up the commercial revenue through their online audiences.

But the lockdown has severe consequences for every football club. England’s red devils are losing revenue from cancelled match days and broadcasting. The postponement of the Premier League will cost them around 20 million pounds. Additionally the club has made it a priority to pay its staff fully and even motivate them to volunteer during working hours. Even though there might not be any live matches, there are still lots of opportunities to engage fans, desperate to get their entertainment fix. 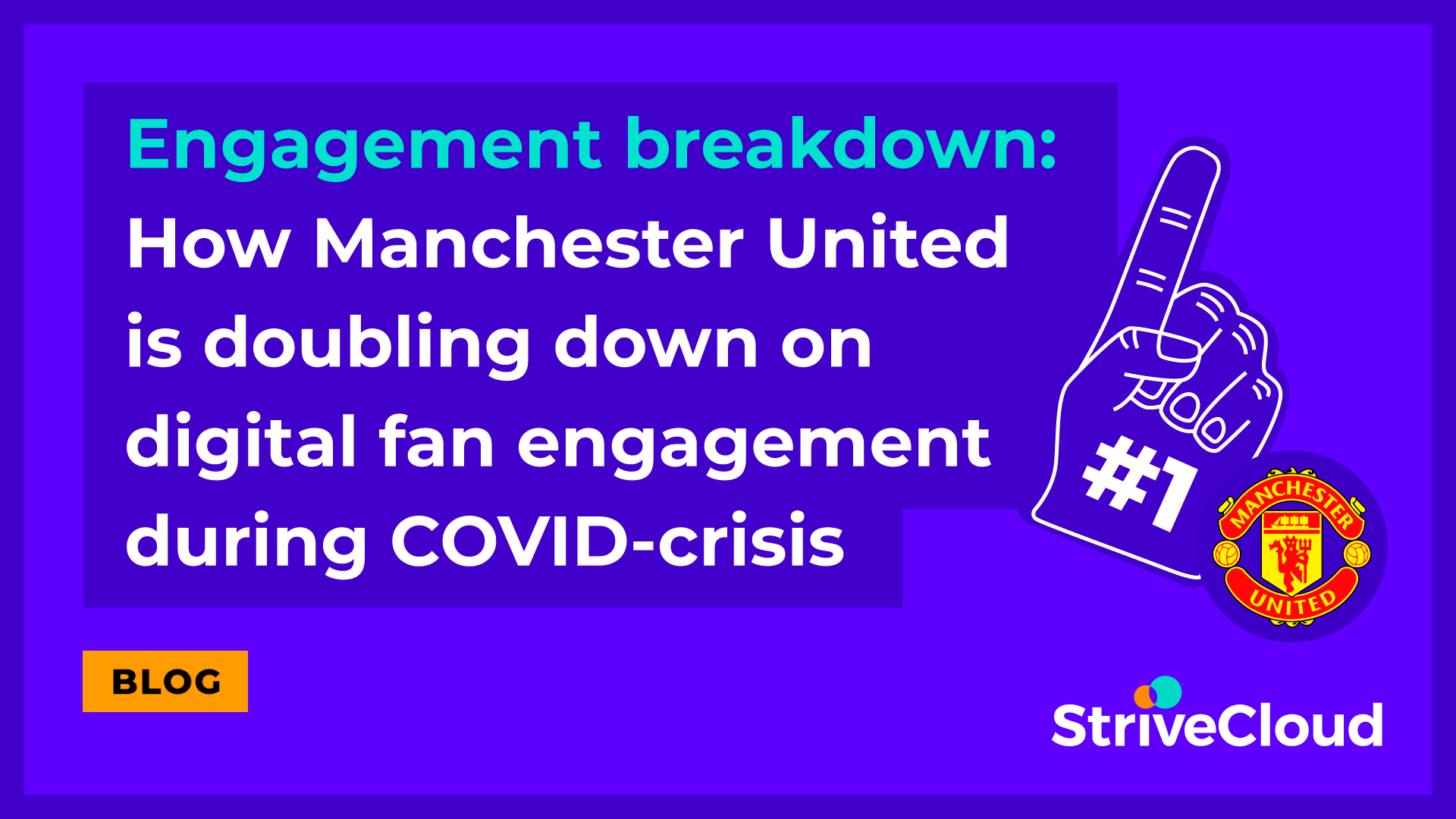 Curious what that is? So are we.

🚀   Double down on sponsorship

“As well as boosting the club’s digital engagement, we are spending the break on expanding our online offering to commercial partners and innovation.”

The club got hit by a 27 million pound loss due to lost broadcasting deals, however they are confident they can still provide value to sponsors differently. With over 659 million followers and an average of 80 million online interactions per day since the COVID-19 shutdown the club has one of the highest engaged audiences in sports.

“Commercial success is only possible because of the unparalleled engagement we have with our fans. The end goal is creating a virtuous circle, where more engagement with our fans equals greater opportunities for our partners.” said Richard Arnold, Director at Manchester United.

Even though there currently aren’t any live competitions going on, there is a lot of interaction between Manchester United and the fans. The club communicates with its fans across different media channels. They post several times a day on social media where they do interactive riddles, throwbacks to legendary ex-players such as Wayne Rooney and Q&A’s with the club’s athletes.

Manchester United also has their own podcast and are very active on YouTube doing crossovers with celebrities and influencers. The club’s dedication to quality content is what boosts digital fan engagement, especially among the so-called millennials who account for 77% of their social media following.

“That phenomenal engagement and digital reach also means that the value of our traditional inventory remains very sought after because it is such a powerful connecting tool with our fans and represents an increasingly valuable commodity in an increasingly fragmented media landscape.”

Manchester United expects to face a 20 million pound loss to broadcasters due to the suspension of the Premier League. To give fans back their football fix a FIFA invitational tournament was organized in which clubs get represented by one of their football players.

After attracting over 150 million viewers in the first edition, a sequence was quickly organized with new players from each team. All matches are broadcasted across different channels such as SKY sports, YouTube and Twitch.

The club has made several donations among which a £300,000 donation to partner schools and a £100,000 contribution to support more than 1,200 foodbanks. The latter of which in cooperation with football club Manchester City in a campaign called #ACityUnited. 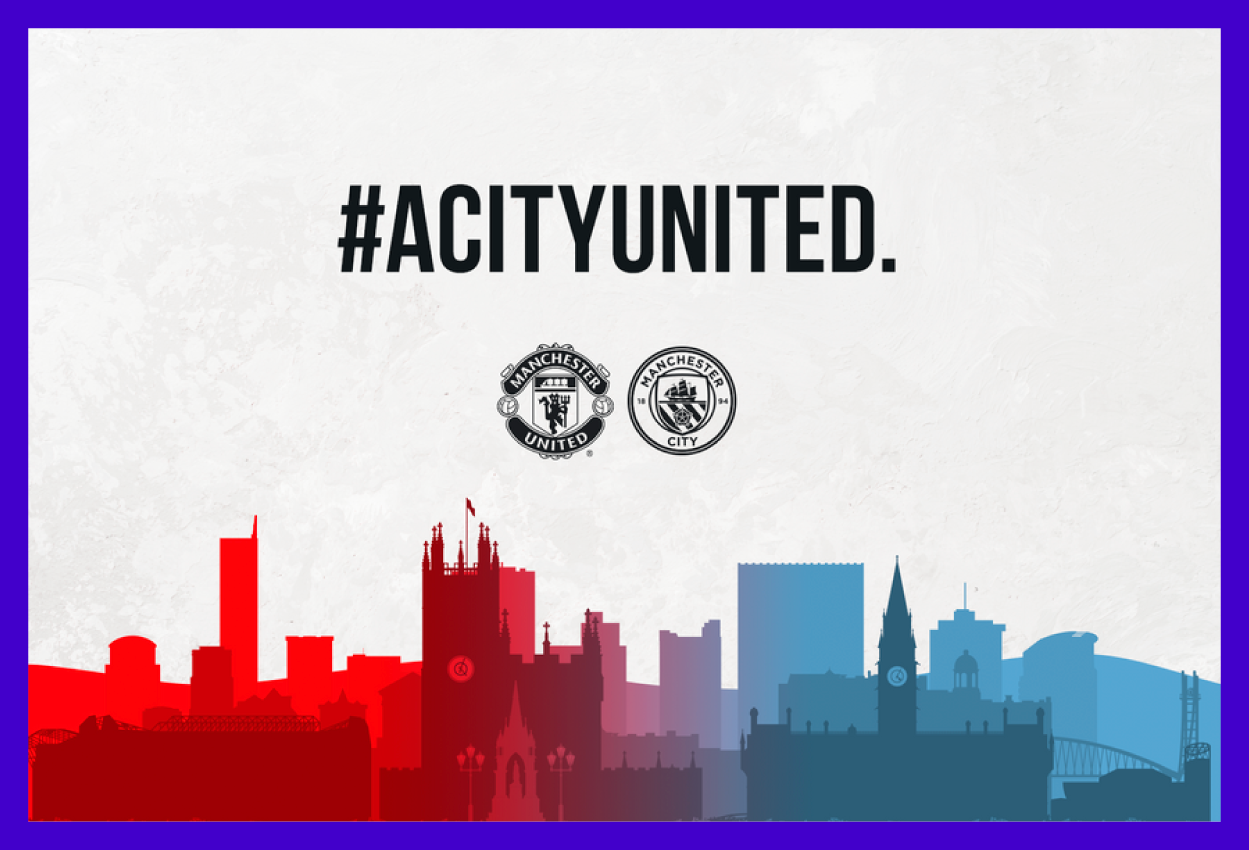 They have also partaken in lots of actions to support medical staff and schools. Including the delivery of an initial 60,000 meals to NHS staff across Manchester and thousands of activity packs for primary school pupils in a partnership with survival expert Bear Grylls.

The public move went even further when United’s captain Harry Maguire asked his club teammates to donate 30% of their wages to charity during the coronavirus crisis. The players immediately supported Maguire’s plans and went on to create a package of measures to support the NHS.

“I’m delighted we are now recognizing the importance of our NHS. The response to this pandemic has been magnificent and has made me proud of the way the club and the British people have rallied round to help.” Sir Alex Ferguson, ex-manager Manchester United.

💪   Support your local community and fans

Next to all their charity work, United is doing a dozen more activities to keep fans engaged and safe during lockdown. They have been communicating very consistently and seem to have their priorities right when it comes to the wellbeing of their fans.

In several media outlets the club has urged fans to stay at home and follow the government guidelines. Additionally, they have worked with the World Health Organization on the #BeActive campaign together with Real Madrid, FC Barcelona and Liverpool. As part of the video campaign world-famous athletes share that now is the time to stick together while keeping our distance and give along some guidelines to stay active during lockdown period.

⚽️   United understands it’s all about the fans

Manchester United is one of the best known brands in the world. Their focus on international fan engagement is what made them earn this spot. In fact, the club opened three entertainment centers across China with interactive and immersive experiences for United fans in China.

In one of the initiatives launched called Frontline Hero they are putting fans that directly battle against coronavirus in the spotlight. The club wants to celebrate the health workers’ stories about dedication and helping others at this time of need. 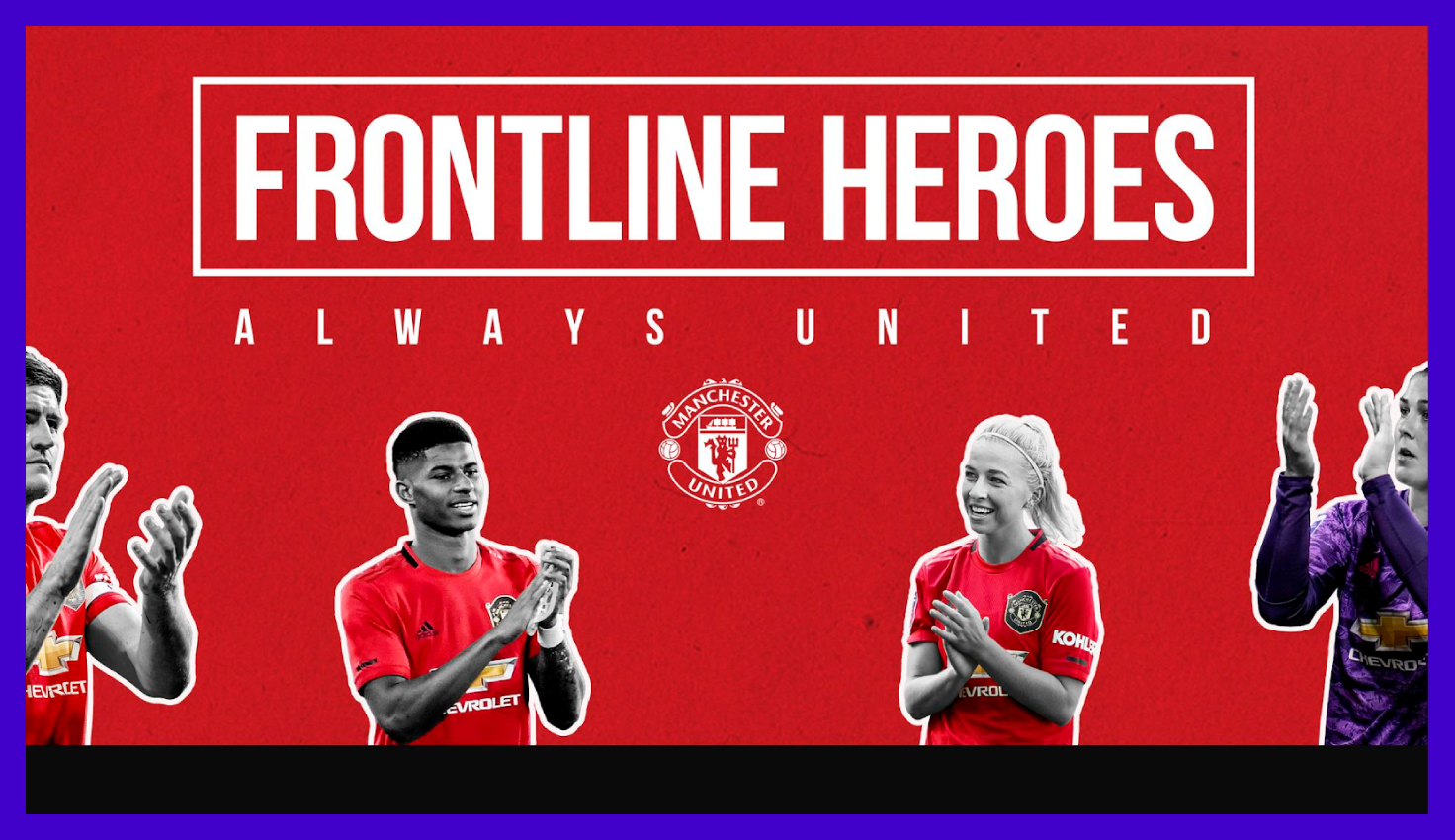 The legends of Manchester United have called over 3,000 of United’s supporters as part of a campaign to keep the club connected with older fans, especially those who are alone in isolation. It shows again how committed the club is to its fans and vice versa.

Nowadays digital engagement is becoming increasingly more important, especially with a third of the world’s population in social isolation. Manchester United has taken this seriously since the beginning with initiatives such as their highly beloved fan app which according to its managing director “has become the most downloaded throughout the world of soccer and is operating well above other industry benchmarks”. Right now their focus on media and content production seems to pay off as they have the upper hand on rivals in challenging times like this.

That said, these are the key takeaways we got from analyzing Manchester United’s fan engagement strategy:

👉  Double down on sponsorship and commercial revenue

Digital engagement is very important for the future of sports clubs as they will continue to shift to a more media-focused model where they can monetize on fan engagement. United has done this magnificently.

There are plenty of things your fans want to see. United has tons of different content ranging from ex-players to current players answering questions or talking about football-related items.

Esports is a major opportunity for sport clubs. The audience is growing rapidly and the tournaments are gaining worldwide attention. Software providers like StriveCloud allow you to organise esports tournaments for your fans, influencers or professional players. With no live sports to watch, sport organizations from all around the world are turning to esports.

👉  Use your status to support others

As a club, engaging yourself both locally and internationally for charity causes is a great way to gain goodwill among the people. Besides doing charity and voluntary work can be an excellent PR opportunity which helps build your public image and spreads a positive message.

What Manchester United does really well is creating a bond with their fans. They do all sorts of activities in which they actually talk with their fans. It’s not just about the fans being a part of the community but actually contributing and thus adding value to it.

Are you tired of seeing no results in your digital marketing? Do you want to start gaining ground in the digital world? StriveCloud is your own online tournament & community platform that allows you to set up tournaments for fans, influencers and professional players in no time! By launching your own online tournament arena you can activate your fan community and maximise eyeball time and engagement for sponsors.

This is like no other summer break. How will you hit your targets in an industry at pause?