The secret to seize & sustain the attention in a distracted world

Attention is one of the most valuable resources of the digital age. Unfortunately for marketers, the demand for instant gratification and constant connectedness makes it difficult to capture and keep consumers’ attention. A study by Nielsen concluded that the human attention span has dropped to 8 seconds, shrinking nearly 25% in just a few years. To put that in perspective, an average goldfish has an attention span of 9 seconds. 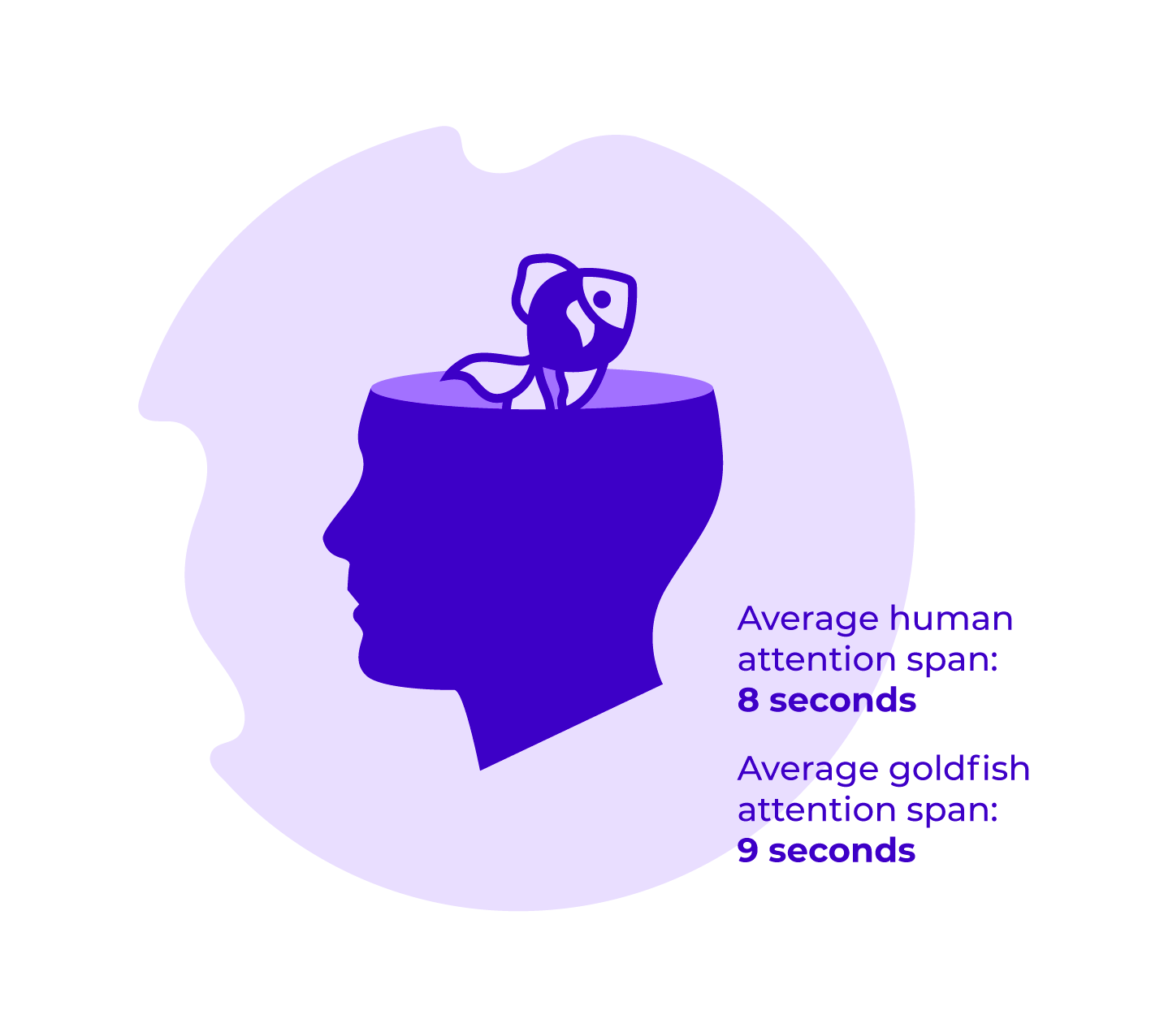 Think about it. How often have you looked at your phone only to be sucked in by a simple notification? Or maybe you have gone down a binge-watching spree on YouTube? This phenomenon is also called the Vortex. It is a user-behavior pattern that begins with a single intentional interaction followed by a series of unplanned interactions. So how do some companies succeed in capturing and keeping your attention while others are losing goodwill through online advertising.

Someone surfing on the web usually has a specific purpose and will not likely be distracted by an advertisement. This leads to consumers ignoring page elements that they perceive to be ads, an occurrence that we call banner blindness.

We live in an attention economy, where consumers receive services in exchange for their attention. Facebook for example, is the most popular social network in the world with over 2.6 billion monthly active users. Facebook’s business model doesn’t run on fees by users, but they make revenue from advertisers who want to gain exposure to a highly engaged online audience.

Companies like Facebook succeed in having you come back every time because they understand their users. That’s where gamification comes in. By using behavioral psychology and motivational theory you can reengineer experiences in order for them to be more rewarding and eventually support your business goals.

What digital experiences use gamification to keep their audiences engaged?

Human motivation is a tricky thing. Superstar companies distinguish themselves from others by understanding the difference between intrinsic and extrinsic motivation and when and how to trigger each. You’re extrinsically motivated when you want to obtain material assets.

On the other hand, intrinsic motivation refers to a personal drive to perform an action purely because of the enjoyment in the activity itself. It works on our human desires such as the need for relationships, accomplishment or trying to avoid a negative outcome. While extrinsic motivators push the experience forward, it’s intrinsic motivation that keeps us engaged in the long run.

Take the launch of the Samsung Galaxy S4 as an example. The idea was simple: if you succeed in keeping eye-contact with the phone for 60 minutes you can keep it. What the passengers who started this challenge didn’t know is that there would be outrageous distractions…

Although the original motivation might be winning a phone, that’s just an extrinsic reward. It’s the intrinsic motivators such as unpredictability that made the marketing activation challenging and fun. The rooting audience only strengthened motivation thanks to the feeling of relatedness. Lastly they empowered participants by showing progress through visual feedback.

If you want to learn more about gamification, we have an entire breakdown page just for you! 👉

It’s an extraordinary time to be a media consumer. More content is available than ever before. 500 hours of content is uploaded to YouTube every minute and Netflix released more than 1,500 hours of original content in 2019. With an overload of choice, consumers are looking for personalized on-demand experiences. Let’s look at some great examples of companies that use gamification for their marketing to capture and hold the attention of their target audiences.

Kayzr is the largest esports platform in Benelux. They provide brands with access to the hard to reach millennials and generation Z target group. Gamers can compete in multiple video games online tournaments and earn rewards.

With over 60,000 users it’s unattainable to give prize rewards to everyone. That’s why Kayzr’s reward system works with two types of currencies. On one hand you can earn hard currency by making big investments in the platform such as joining and winning multiple tournaments. With these coins you can order real physical rewards in the Kayzr online shop. 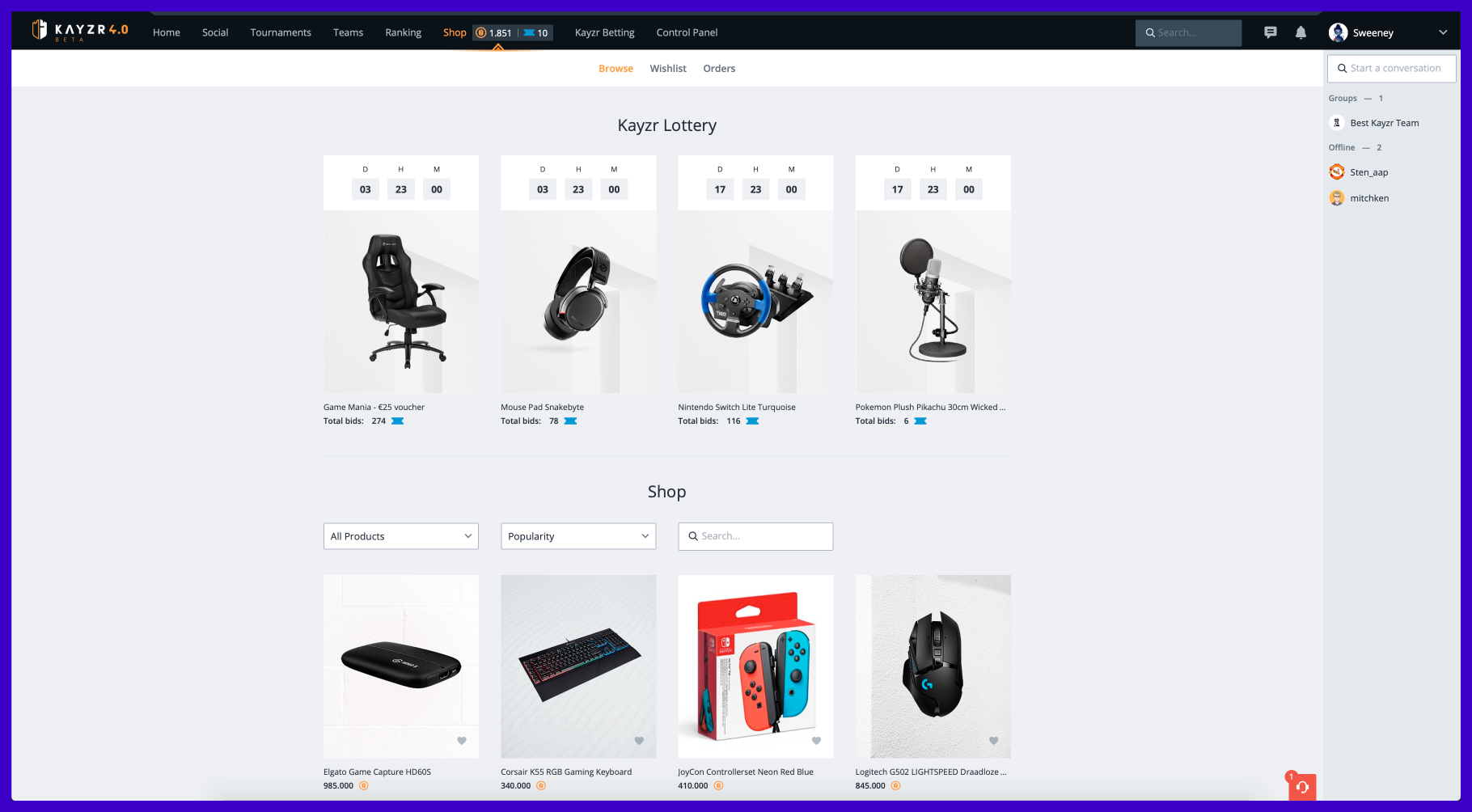 To spark unpredictability and shift to an intrinsic motivation there are also Lottery Tickets. These are seen as a soft currency to reward actions that stimulate user behaviors linked to Kayzr’s platform experience goals. For example you can gain lottery tickets by logging in daily which stimulates daily activity on the platform and thus increases eyeball time for brands. With those tickets you can make bets on certain prizes with a chance of winning it. Making the reward system unpredictable sparks users’ curiosity and creates a more sustainable engagement than cash rewards.

Another case comes from the cloud storage company Dropbox, who is well known for hacking viral growth through gamification. They created a ‘7 steps checklist to get started with Dropbox’ quest to stimulate referral marketing. The steps are as simple as inviting friends or linking Dropbox to Facebook. For every completed step in the process you get free extra storage space and once all steps are completed you gain the social status of Dropbox Guru. Creating a status in a gamified experience creates competition among users and a desire to climb up the ladder. Adding elements like leaderboards, levels or badges are great for stimulating competition among users, and encourage their progress on the platform…

Activity tracking company Fitbit employs game elements as well to support people’s intrinsic goal of becoming healthier. At first they help you crystalize your goal by defining it. For example reaching 10,000 steps every day.

To motivate users into carrying out their goals they include all types of game elements. First off, you earn badges and trophies for special achievements. Your steps are exchanged into a currency and can be used for competitions and leaderboard ranking. The app also provides instant gratification through feedback. As soon as you take your first steps you will see the progress in your steps counter and as a progress circle.

This is powerful because we’re motivated by progress or striving towards a goal even more than to the actual reward. In order for motivation to work you need freedom of choice and freedom to fail. If a game obligates you to play at certain times, it won’t be fun anymore. For example, Fitbit realized that punishing people for not achieving their goals would lead to giving up easier.

When it comes to notifications there is a fine line between nudging and nagging. Fitbit does this well by providing little encouraging contextual notifications when a goal is reached or close to being reached. To add a dash of competitiveness and play with our innate desire for relationships, Fitbit allows users to set up groups with friends where they can chat and compare stats. 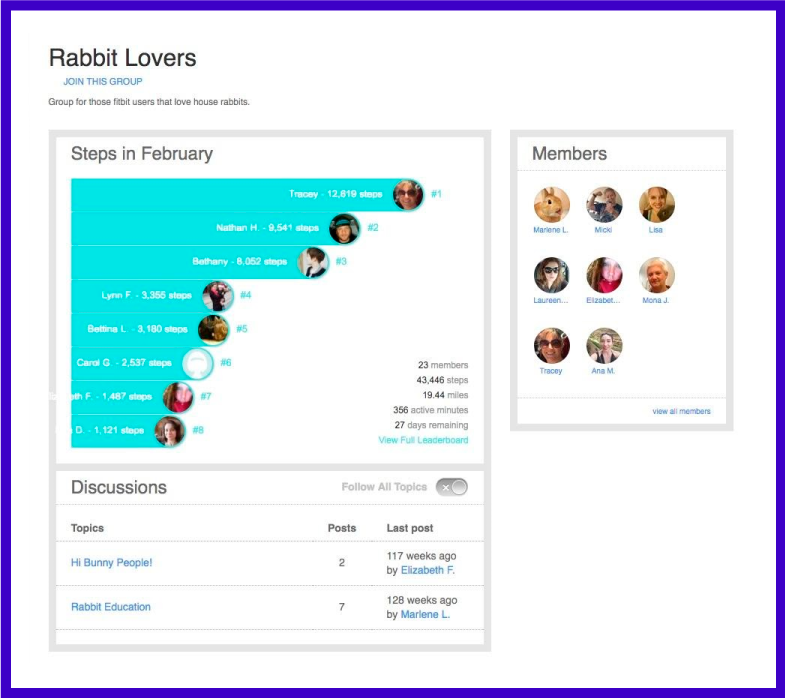 The sign-up process in a gamified system should be as frictionless as possible. At StriveCloud we learned that by only asking for a name and email address in the beginning, users are less prone to churn right away. Our technology helps the data flow by linking static CRM data to the experience and setting milestones to guide desired actions. People are motivated with rewards and achievements which allows you to collect personalized data based on the choices made in the gamified context. Lastly notifications are used as a trigger  to reinforce those actions and keep the user engaged. As the amount of interactions increases so will your data. You can literally learn anything about your audience just by adding a motivational trigger and emotional drive.

The Hook Model by expert on behavioral design Nir Eyal, is a system used in digital products to increase user engagement and retention by subtly influencing their behavior. It’s what makes apps like Facebook, Pinterest and others so addictive. The Hook Model is a four-phase process used to create high-frequency engagement. It follows a series of steps which conditions users to link certain emotions and triggers to carrying out behaviors. 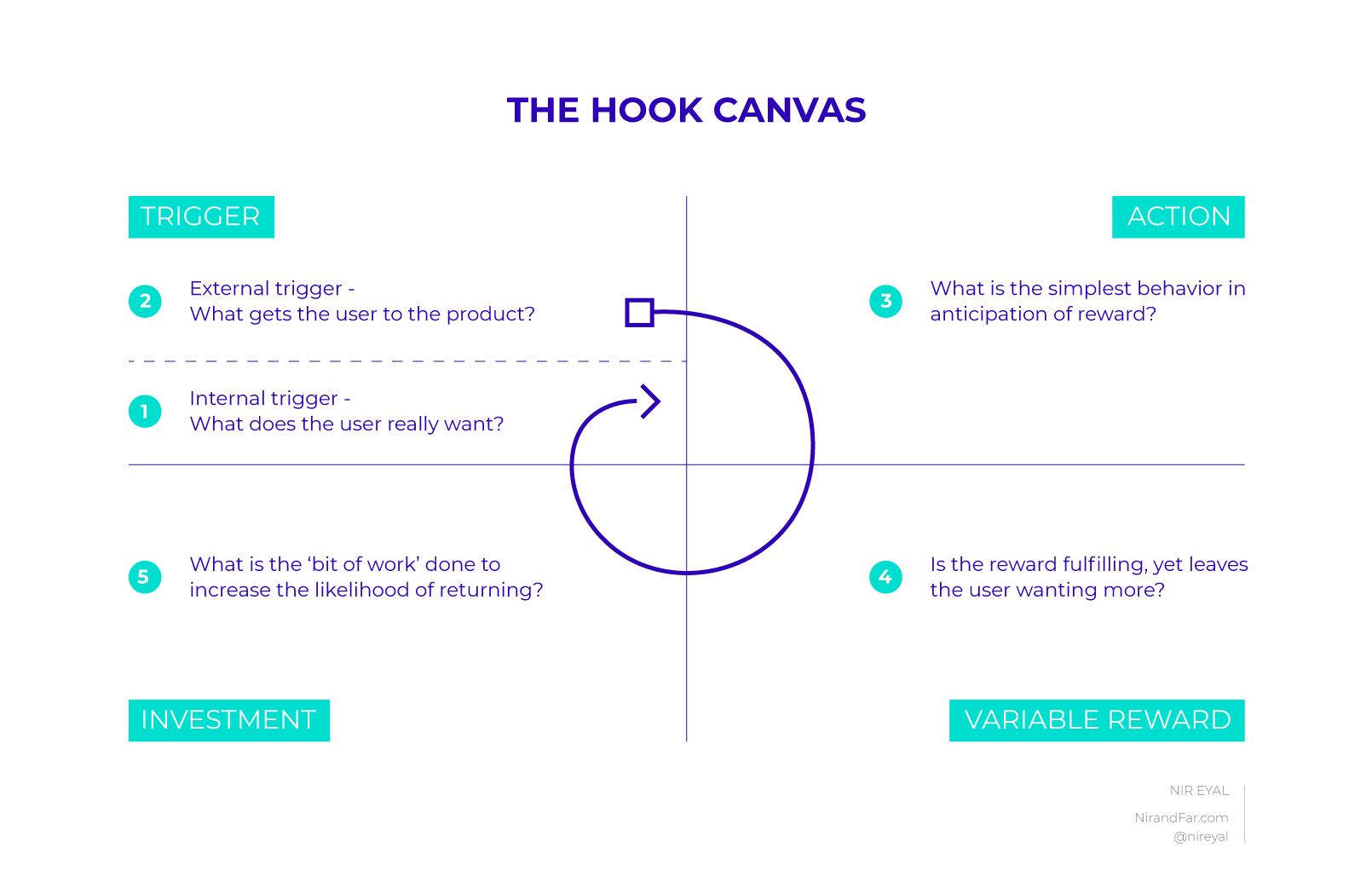 Your experience always starts with an external trigger. This can be something simple such as a notification, email or clicking a link on your newsfeed. What’s absolutely critical to forming long term habits is an association with an internal trigger. Internal triggers are tied to an emotional drive such as our desire for self-growth or social contact.

For the behavior to be fulfilled there should be a trigger, motivation and the ability to take action. Doctor BJ Fogg who founded the Behavior Design Lab at Stanford University created the Fogg behavior model to understand the interrelatedness between motivation, ability and triggers. It states the action should be as easy as possible, however still challenging enough to execute. 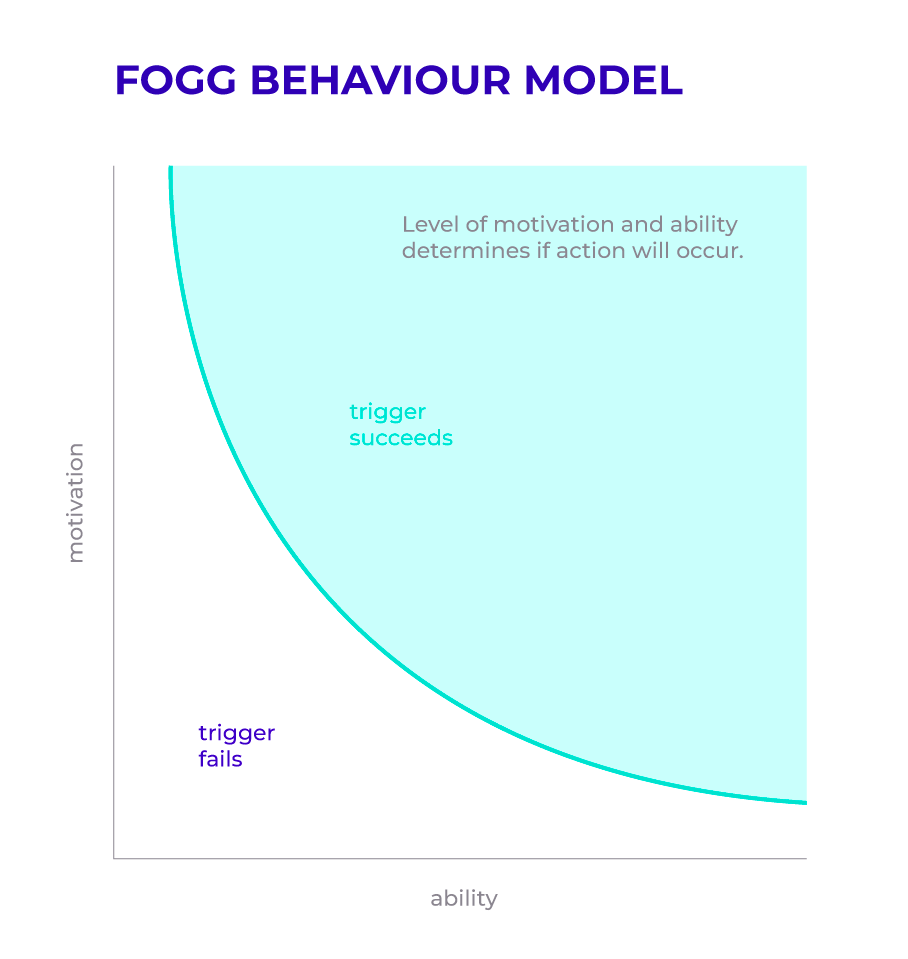 To reinforce desired behavior (e.g. the actions a user takes) you have to immediately reward them. Research actually shows the anticipation of a reward is what truly spikes dopamine levels. It explains why we keep scrolling our feed waiting for a piece of content we enjoy. What makes the experience so addictive on social platforms like Facebook or Instagram, is the fact that our reward is variable. The scrolling effect is similar to slot machines back in the days. You never know what you are going to get which produces variable dopamine spikes and finally a trance-like state of anticipation.

Lastly, to make the user more prone to return, you ask for an investment. The investment stands for work that is done to build commitment and increases the likelihood of returning. Unlike actions, investments are about the anticipation of a reward and not immediate gratification. When you set-up an Instagram profile for instance, you will not immediately be hooked on the app. However, the more work you put into it, such as customizing your profile, following friends and posting your own pictures, the greater the personal value of the app and your likelihood of returning.

With people at the wheel of their own digital experience and an overflow of content to consume it’s becoming increasingly difficult to capture someone’s attention. Finding what motivates your audience and redesigning your digital experience will help you make it more appealing.

There are lots of digital experiences out there that use gamification to support their business goals. They stimulate behaviors such as word-of-mouth through both intrinsic and extrinsic rewards. Other game-like elements are also used to advance user onboarding and to continuously harvest new and personalized data.

Once you have someone’s attention, it’s still a challenge to maintain that digital engagement. Luckily the Hook Model – created by behavioral designer Nir Eyal – gives us a four-step process to create high-frequency engagement in digital products or services. By going through the phases called ‘the hook’ the probability of returning increases. The right mix between investment and reward creates an almost addictive experience which not only increases lifetime value but supercharges growth.

Tired of being overlooked? Stop missing out on precious eyeball time! Learn how to win back attention and maximize engagement with gamification with our free webinar 🔥
Topics: Digital Engagement Tactics, esports Activation, Online Tournaments

Table of Contents
1. Fighting short attention spans with gamification
2. What digital experiences use gamification to keep their audiences engaged?
3. Boost digital engagement with the Hook Model
4. Too long, didn’t read? Here’s what you missed:
Go to Top