2020 has been an uncertain and frustrating year for the sports industry. Many leagues have been postponed or even canceled, while clubs are losing a great deal of matchday revenue. At the beginning of the crisis, a few athletes started streaming FIFA tournaments against each other. Some clubs picked up on the trend and started their own esports campaigns.

While the matches were warmly received by thousands of fans, they were not optimized for team or sponsor purposes. However, with a second wave of the Coronavirus coming, sports federations and leagues can now take matters into their own hands to reap the full benefits of esports marketing.

That being said, here are 10 esports campaign ideas you can launch today:

At the beginning of the COVID-19 outbreak, sports organizations were forced to turn down their fans and weren’t able to produce live content, matches, or experiences for their loyal audiences.

Instead of losing out on fan engagement, Belgian sports broadcaster Proximus and the Belgian football Pro League partnered up with StriveCloud to organize an esports campaign to win back eyeball time without live matches.

During the campaign, fans could register online to represent their favorite team of the League in FIFA tournaments. Fans could compete against each other, interact with different brands, and win sponsored prizes.

By using StriveCloud’s gaming tournament platform, clubs had the opportunity to connect with fans at home while simultaneously being introduced to a new esports audience. 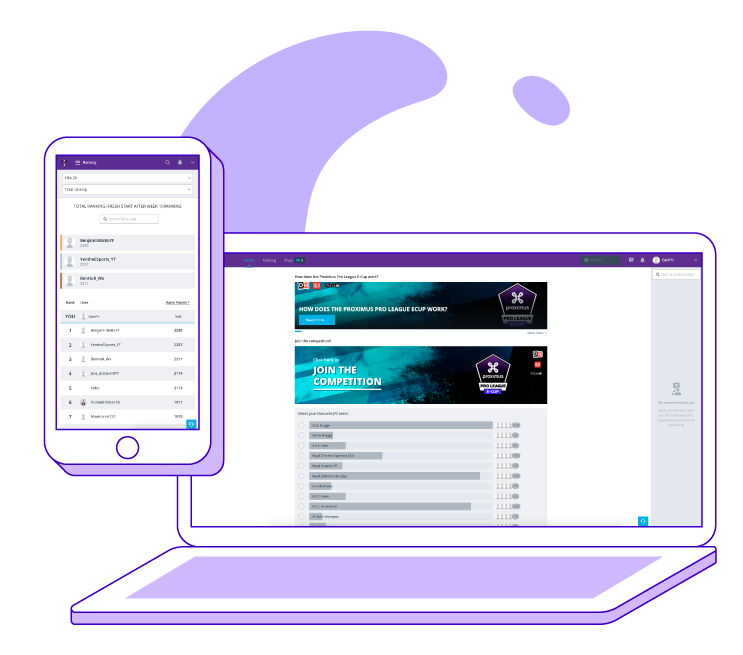 Swiss esports agency eStudios helps brands get into every aspect of esports and gaming. They also host their own gaming community named GameTurnier. When they were first confronted by COVID-19, they had to reimagine their online tournament platform and turn offline event cancellations into online eyeball time for its brands.

StriveCloud helped eStudios set up a new gaming tournament platform for the FIFA audience on GameTurnier. They created a white-label option for GameTurnier to quickly organize online tournaments at scale. Employees who normally organizing real-life esports events were now organizing online tournaments for brands. Today the fan community on Game Turnier is playing over 600 competitions every week.

To extend the organic reach they invited pro-FIFA Player Luca Boller to launch the new platform. Luca or LuBo organized his own tournament and invited his fans to participate in the competition. He explained how easily the tournaments worked live on his Twitch channel, which helped capture lots of attention in the FIFA community.

All these were possible because the new gaming tournament platform allows players to easily stream matches on their personal accounts with the push of a button Twitch integration. And the best part, you can integrate as many streaming channels as you want.

The online tournament arena created an opportunity for sponsors to connect with different games and audiences, that fit their brand best. In just the first two months after the launch of GameTurnier received over 4,000 hours of organic eyeball time and started 10 new campaign discussions with brands!

How this Belgian football club raised € 85,000 for charity through 1 esports tournament

All eyes on you with esports tournaments for Pro players

Earlier this year the Premier League organized a FIFA 20 tournament for charity. After a weekend with no content to post Luke Lambourne, the media manager for League Two club Leyton Orient came up with the idea of organizing an online FIFA tournament.

While the idea was great and it quickly went viral with over 128 teams from around the world participating, it could have been better organized to maximize fan engagement. If you capture the gaming audience on your own online tournament platform, you can build a community where fans can interact with each other and your team, while you own the data generated by each interaction. You can motivate fans to participate in tournaments or to be active in the community by rewarding behaviors with sponsored shop items or lottery tickets to win bigger prizes. 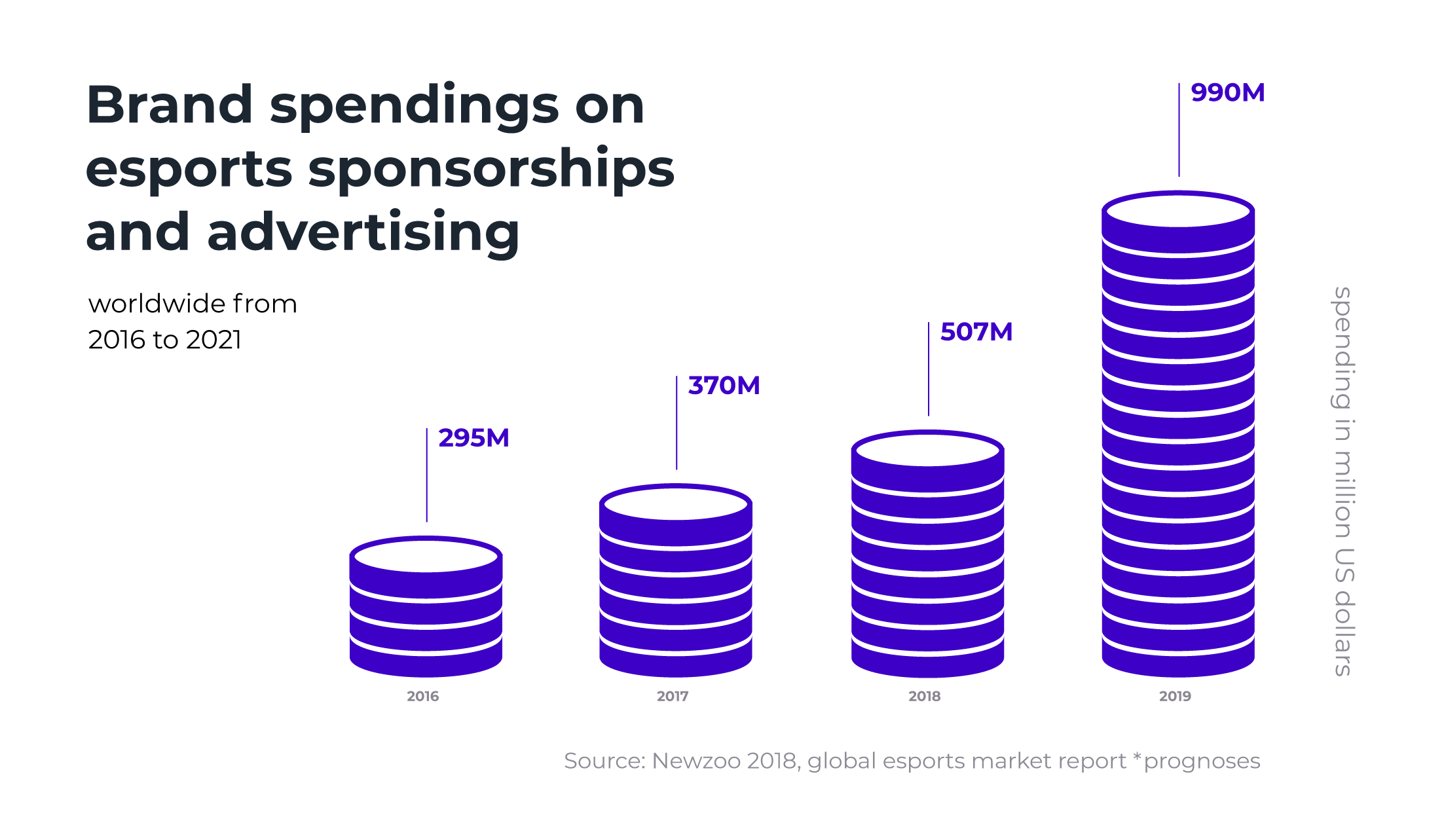 What can our gaming tournament platform do for you? Discover all about it here!

Connect your fans in a central fan hub

Mountain Dew built a native esports hub to raise awareness for its own esports league. The platform served as a central place for all their content around the league such as recaps, custom videos, and even predictions for the global Finals.

NBA for example created an official fan app for all 30 NBA teams. In the app, fans can play NBA-related games, discover content, interact with the community, and even buy merchandise.

Sports clothing brand PUMA partnered up with esports organization Cloud9 to create a clothing line for the esports community. Instead of straight-up trying to push their designs forward, they used social listening tools to create a Cloud9 dedicated collection.

Insights company Nielsen found that the sentiment around the partnership was 700% higher than the norm for traditional sports. Why? Because PUMA’s goal wasn’t getting likes. They wanted to involve their fans in the conversation. It soon became clear that the active fan participation in creating the apparel resulted in significantly higher engagement.

“PUMA has witnessed the nature of sports and sports culture change over the course of the last decade, and it has become apparent that esports has a valuable role to play in how the next generation shapes sports culture.” Matt Shaw, Team Head of Digital Marketing @PUMA

What makes esports fans so engaged, is the fact that they’re allowed to see behind the scenes. Often fans follow their favorite teams or players in their preparation for competitions or even just their everyday life. It makes fans feel more involved in the journey before, during, and after competitions.

This process humanizes the brand, making it more relatable. By playing into people’s curiosity viewers are more engaged. Research among a thousand streaming experts even said that 87% of people will watch a live stream if it includes behind-the-scenes content.

The best thing about streaming platforms is the real-time engagement between fans and streamers. Old Spice, a brand of male grooming products, took this to the extreme when they let Twitch viewers control a man’s life for three days.

Together with renowned marketing agency Wieden+Kennedy, they created the “Nature Adventure” campaign. Inspired by a viral Twitch Game “Twitch plays Pokemon”, they placed an actor in a studio molded into a forest with a range of possible scenarios.

Their message to fans: “Use the chat feature to send whatever commands you want the man to perform. For example: give that antelope a message, build a sundial out of those snack cakes, or eat those strange berries that could command you decide to use.”

Of course, the audience on Twitch loved this humorous marketing stunt and the live stream amassed 2.65 million total views, with 1.4 million viewers in the chat. It didn’t take long for the campaign to gain global exposure as one of the most original Twitch campaigns so far.

Sour Patch Kids, one of the main sponsors in the Overwatch League drove brand awareness through short-form shareable video content around its brand slogan “Sour, Sweet, Gone”. The video series featured “turning-point” situations where players went from a sour situation into a sweet one.

Instead of pushing boring, long-form content, Sour Patch Kids gave quick and engaging game highlights, related to their brand that resonates better with their target audience.

Content doesn’t always have to be brand-centered. You should create campaigns around the esports experience. Instead of interrupting your audience with self-centered ads, you’re actively contributing to the overall experience.

There’s no better way to delight your fans than with a pleasant surprise. FACEIT, the esports platform that organizes the global Esports Championship Series for the game Counter-Strike, realized they needed a way to keep their 15 million users extra engaged during the series.

Fans of the game could collect loot drops by watching the Championship Series or by participating in the game itself. They could then redeem the points inside the loot drops for real-world prizes, in-game items, and other rewards. Among the prizes were 10 PCs, 28 gaming chairs, and even a car!

The takeaway for sports organizations here is rewarding fans, especially randomly and unexpectedly, can raise anticipation even further.

Distinguish yourself with unique interactions between players & fans

Streaming is especially popular due to the direct interaction between fans and players. Well, what if you were able to make that experience even more personal?

You can organize fan tournaments, where influencers/pro players participate in random matches. The possibility for fans to compete against their idols creates excitement and engagement.

The Belgian Pro League, for instance, held a gaming competition between the Belgian football clubs’ players to keep fans entertained during the postponement of the league. Every club put 1 player forward to compete in FIFA20. The matches were streamed on the Pro League tournament platform and promoted on social media and through the press.

Up to your next esports campaign

With sports competitions running at half or less of their stadium capacity, esports is a proven solution to keep fans engaged. While we saw plenty of initiatives in the first lockdown, most of them lacked a structured organization. Players competed and streamed their online competitions but there was no clear campaign launch or a formalized execution plan to benefit from fans’ engagement.

When executed correctly however esports experiences in fan engagement campaigns maximize eyeball time for sports clubs and their sponsors. It can be a way to attract fans, create sponsor exposure, and improve viewing numbers!

After seeing the idea validated before, sports organizations are now in the best position to launch their own esports campaigns. Fortunately, it doesn’t take long to set up your own online tournament platform. The Belgian Pro League for example was up and running in one week.

Not only will it make isolation more fun for fans, but it will allow you to build your own database on an entirely new and difficult-to-reach audience. Ready to get started?

Table of Contents
I. Keep your audience involved with fan tournaments
II. Amplify organic reach with influencer or celebrity tournaments
III. All eyes on you with esports tournaments for Pro players
IV. Connect your fans in a central fan hub
V. Engage more fans by social listening
VI. Go viral with the interactive content experiences
VII. Connect with younger audiences through relatable content
VIII. Generate extra buzz with unexpected rewards
IX. Distinguish yourself with unique interactions between players & fans
X. Up to your next esports campaign
Go to Top