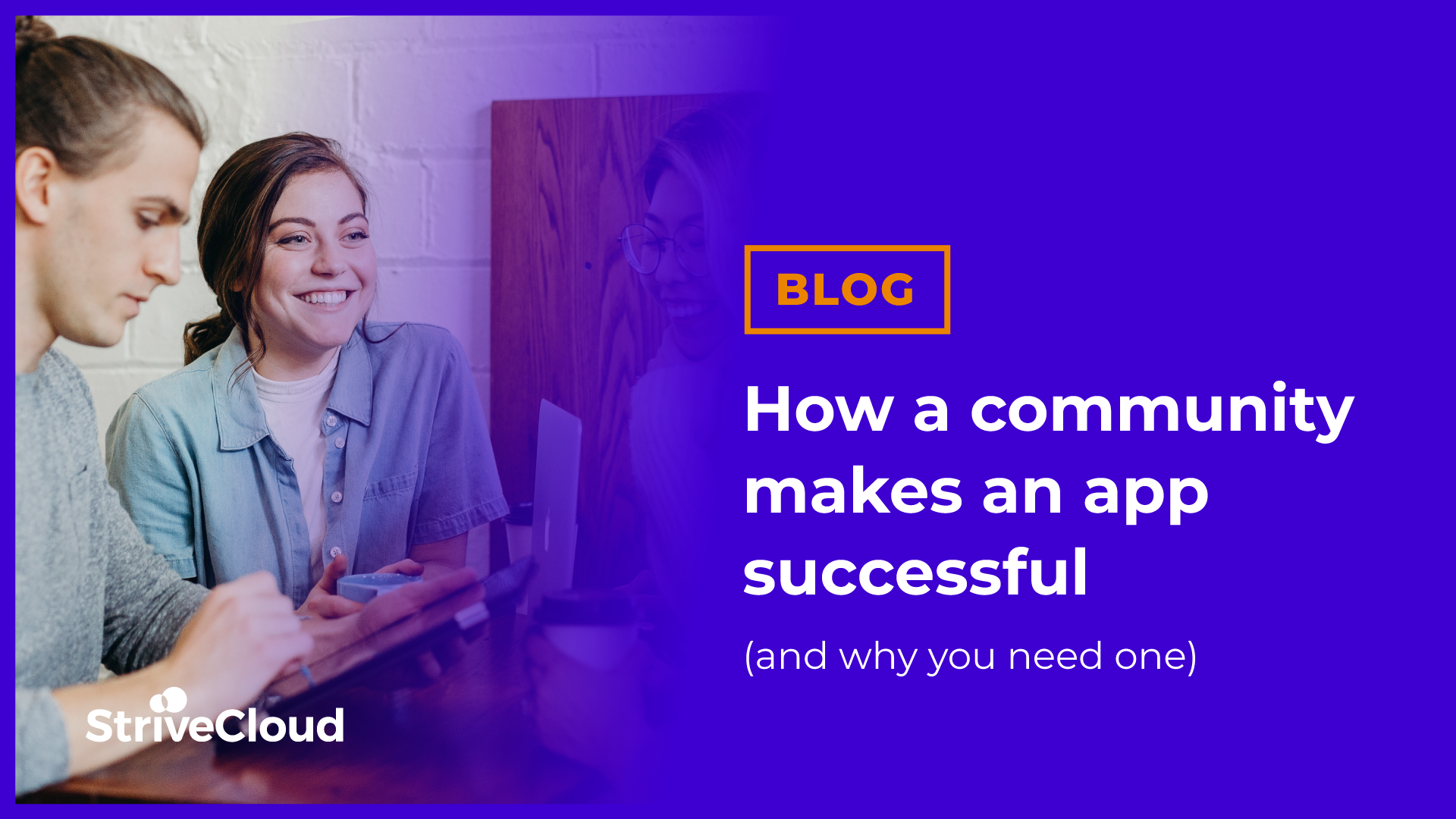 Did you know that the top 10% of app users will spend 3x more than the average customer? Needless to say, creating such a top tier of loyal users requires a lot of effort. Currently, that might be a challenge for apps.

Whether it be eCommerce where 88% of users dropping out before buying anything, mHealth, where apps experience a disappointing 4% user retention after 30 days, or banking, which retains a larger but still small 10% of its users.

So how do apps use communities to increase user retention?

Let’s find out how a community can affect app success and learn from 3 great gamification examples on how to grow your community:

The untold science behind communities

To reduce churn, you must give users a reason to stay on your app. Essentially, you need to provide the right motivation for the users to install and keep using your app.

Behavioral research finds that users tend to install new apps due to extrinsically motivating factors, such as getting rewards or praise. However, to create long-term mobile app engagement, you need intrinsic motivation as well. A great way to increase intrinsic motivation is to play on the human desire for relatedness and social connectivity.

In 2020, out of all app categories, social apps attracted the most weekly engagement. This is no coincidence; research is clear that communities create an engaging and satisfying user experience.

One of the most well-known scientific studies on how it works is ‘the need to belong’. In this paper, social psychologists Baumeister and Leary describe what makes relatedness so motivating. The report’s conclusion names social relations as a “powerful, fundamental, and extremely pervasive motivation”.

In addition, the study writes that forming social attachments “produces positive emotions”. In other words, intrinsic motivation! The use of social levers has been used in many gamification examples before. Together they work in synergy to keep users engaged and motivated by enabling a joyful experience!

To sum up, a community makes for a rewarding experience by providing the need to belong, which motivates users to keep the app. Improving intrinsic motivation through the community has clear benefits – a modest jump of 5% in user retention can boost profits by as much as 25-95%!

How do mobile apps benefit from communities?

A loyal community helps alleviate two squeezes that are affecting the growth of mobile apps. At the outset, the average cost of registering a new user is close to $4. On the other end, you have most mobile apps struggle to retain more than 10% of new users past Day 30.

An app community has proven benefits to solve both of those problems and more:

While losing 90% or more of your users by Day 30 might be ‘normal’, that doesn’t mean it isn’t a problem. Solving it is a part of the solution in making your app successful. The apps with better user retention metrics just so happen to be the top apps on the market! You can see this shown in the graph below.

Here’s how gamification helps you build a loyal community

Gamification is the use of game psychology, motivational science and game-like elements in a non game context. Some well known gamification examples include the leaderboard on Strava or the reward system on Duolingo. The most popular apps in the world leverage gamification to create powerful in-app communities.

New to gamification? Catch up to speed with our ‘What is Gamification’ page!

Game elements like a leaderboard or competition can contribute to a community by motivating users to engage in it. Apps like Dropbox rewarded users for sharing with friends or posting on Facebook, whilst LinkedIn keeps users engaged throughout onboarding with a progress bar. The sheer growth of these two apps should tell you enough about how gamification can boost your community.

That being said, here are 3 things to keep in mind when using gamification for app communities:

To top it off, a growing community leads to the rise of influential and highly active members of the group, who can strengthen the network further and bring in new users. In short, a successful community becomes resilient and will stick around!

Building a community is already hard enough… That’s why we made gamification easy! Learn more about our app gamification software.

We already mentioned some examples of gamification-led community growth in Dropbox or Strava but let’s take a step back and look at how it works with a little more detail.

Below are 3 gamification examples to learn from.

Kazyr is the biggest esports platform in the Benelux with a community of over 100,000 users. They connect esports streamers, gamers, and event organizers through online and real-life tournaments in a variety of games.

The Kayzr community is driven by a shared passion for esports and gaming. A great intrinsic motivator to start with. However, a wide range of game elements like leveling systems, leaderboards, and badge rewards ensure users keep interacting with the community.

Nike Run Club’s social element greatly influences users to continue using the app. By encouraging users to compete against each other, the app fosters a sense of community. As a result, the app fulfills the human need to socialize. In addition, when users interact they keep each other motivated.

Research confirms that feeling part of a larger community leads to long-term mobile app engagement. The running app does everything in its power to keep users interacting with one another. Not only do users have a social feed, but there are also plenty of opportunities to team up and form an exercise group. Maybe that’s why they call it the Nike Running Club?

Feeling part of the team adds a great sense of motivation for a lot of people. That’s why banks like Barclays leveraged this feeling with their Barclaycard Ring. They described this as a social debit card with the goal of financial education.

Members of the ring were awarded according to their participation in an online forum and the provided feedback they gave to each other. They worked as a team and learn about things like financial management, while also having an accountability partner. For instance, if the community of card-holders met a target, such as staying under a credit borrowing limit, they would all receive rewards.

To sum up, fostering a community is one of the most important steps in creating a long-lasting app. As well as the boost to user retention metrics, users are 4x more likely to refer others if they feel they belong to the community. When done right, social interaction among users is both a powerful and affordable strategy at any app’s disposal!

Currently, most apps have trouble with user retention. This is true across the board – for mHealth, where user retention is just 4% after 30 days, or banking, which is a low 10%. However, while it is ‘normal’, user churn is a serious problem that needs solving! To be sure, the top apps are those that found a fix. A powerful solution is an app community.

How do in-app communities work?

People feel ‘the need to belong’. Research shows that social relations provide a “powerful and fundamental motivation”. As well as a source of “positive emotions”. In other words, this is intrinsic motivation, which makes your app enjoyable to use!

Where does gamification come in?

You can find great gamification examples in apps like Facebook, Dropbox, Strava, and many more. Building opportunities to socialize fosters the environment for a cohesive community to form.

As a result, you will see the rise of influential and highly active group members, who can strengthen the network further. In short, successful communities are resilient!

What successful gamification examples are there?

Kazyr is the biggest esports company in the Benelux region with over 100,000 users. The app connects gamers and event organizers, allowing them to discuss and create content.

Barclaycard Ring was a team credit card where users worked together to meet targets and earn rewards. In ‘gaming’ together, users improved the health of their finances!

To sum up, fostering a community is one of the most important steps in creating a long-lasting app. As well as the boost to user retention metrics, users are 4x more likely to refer others if they feel they belong to the community. When done right, social interaction among users is both a powerful and affordable tool at any app’s disposal!

Table of Contents
1. The untold science behind communities
2. How do mobile apps benefit from communities?
3. Here’s how gamification helps you build a loyal community
4. 3 gamification examples that created successful communities
5. Recap
Go to Top