Breaking into esports as a professional football club 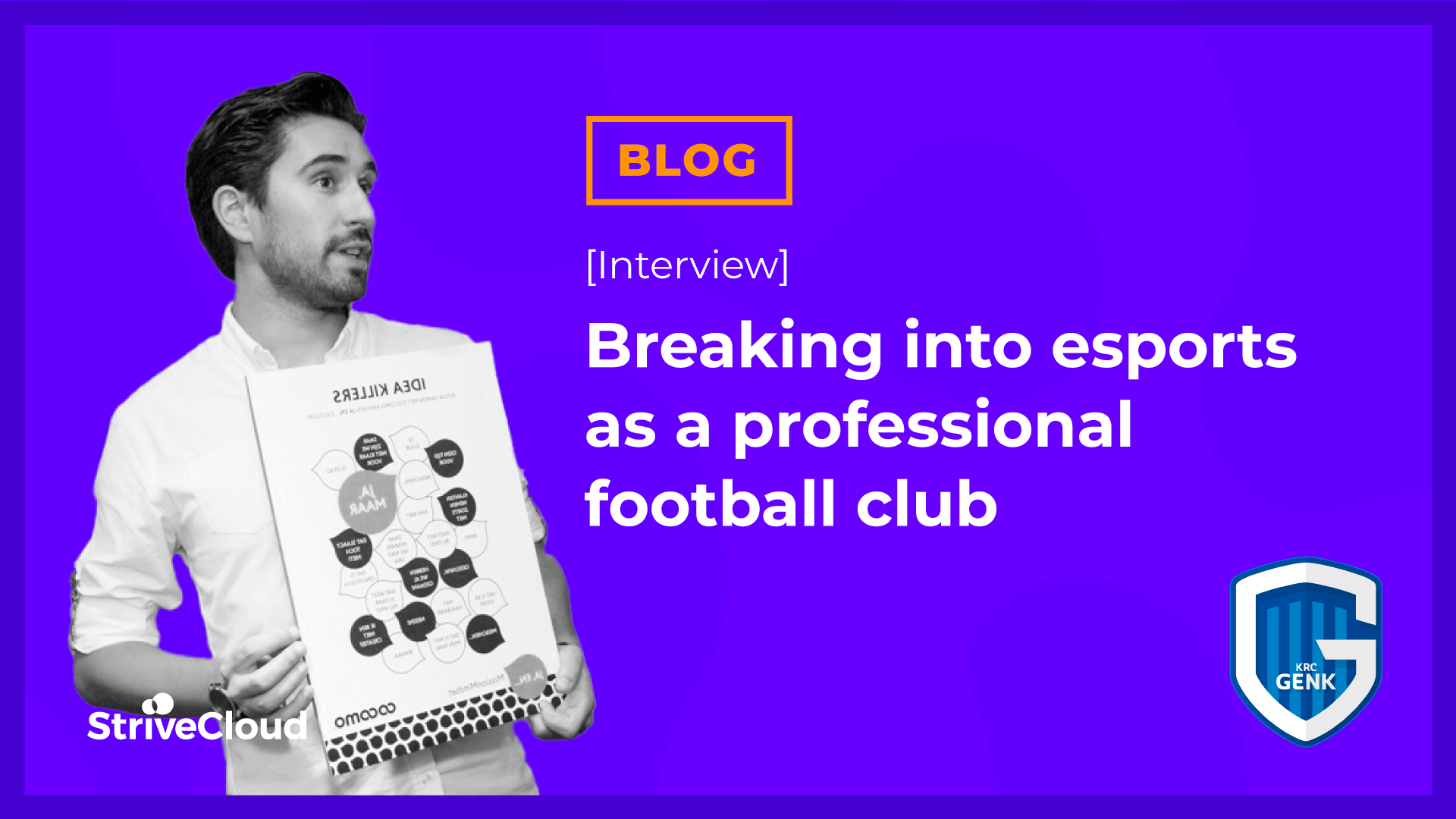 In case you haven’t noticed: esports is growing at an insane rate. With billions in global revenue and hundreds of millions of fans, the industry is undergoing massive professionalization. One of the first Belgian professional football clubs to take advantage of this trend is KRC Genk. They will be launching several esports initiatives with the help of the leading gamification company StriveCloud. This way the club wants to win esports fan engagement and be among the first to take advantage of an internationally growing community of fans.

We had the pleasure of interviewing KRC Genk’s Strategic Partnership Manager: Davy Vanhaen. He is responsible for the partnerships along with Commercial Director Stephan Poelmans. Davy’s goal is to find new partners to bring revenue. He gives them strict guidelines, yet enough flexibility to innovate.

So are you a sports club considering an entrance into the esports industry? Here are the key learnings from our conversation with KRC Genk that will help you get started in the esports market!

If there is something the past year has made clear, it’s how volatile and perhaps outdated the business model of the sports industry is. After seeing its revenue drop by over $718 million due to lost income from tv deals, ticket sales, and sponsorships it soon became clear the sports business model had to change.

“The two biggest challenges as a club are found in transfers and media money. We are restructuring the model to add more income-producing assets and find new ways to create value for our partners.”

Davy stated the importance of innovation as a club. The world is becoming more digital every day. You can’t slack off if you want to survive. Especially as the media landscape is changing, so are clubs altering the way they engage with fans. Even if social media has taken on a more important role, streaming platforms like Netflix and Twitch are climbing to the top. In fact, Twitch broke a viewership record in the second quarter of 2020 after a 62.7% increase, reaching over 5 billion total viewing hours. The streaming model has changed how people consume content and media around the world.

“As a football club definitely in Belgium, definitely in Europe you have a fixed position. If you don’t have big investors you are just growing in little steps. Positions in the football ecosystem are fixed, and it is easier to go down than up.”

KRC Genk sees this as an opportunity to launch their own esports initiatives. There are lots of commercial opportunities in esports. Consulting firm Mckinsey stated that esports sponsorship opens a valuable marketing channel for brands due to a 10% growth in audience size, esports garnering over 500 million viewers in 2020.

Ever since the first ‘Spacewar’ gaming tournament in 1972 with 10,000 participants across the United States, the industry has shown tremendous growth and professionalization. In November 2019, tens of thousands of young fans sold-out the AccorHotels Arena in Paris for the League of Legends World Championship.

Additionally, 44 million viewers followed the event online in 16 different languages on over 20 platforms during the finale. The total number of viewers counts 100 million, officially beating the Superbowl in 2019.

“Esports is structural and fundamental for the future of KRC Genk. Furthermore, it matches the identity of our club to challenge everything. Overall it is in our DNA to test new waters and it matches our commercial ambitions. We took on the challenge to enter esports and we are taking it to the next level.”

Besides, fan engagement in esports comes in various ways. For instance, you can play games yourself, watch game-play or tournaments streams or just follow the general news. While live events were canceled in the esports industry as well, the consumption of games and game-related media kept rising after COVID-19. 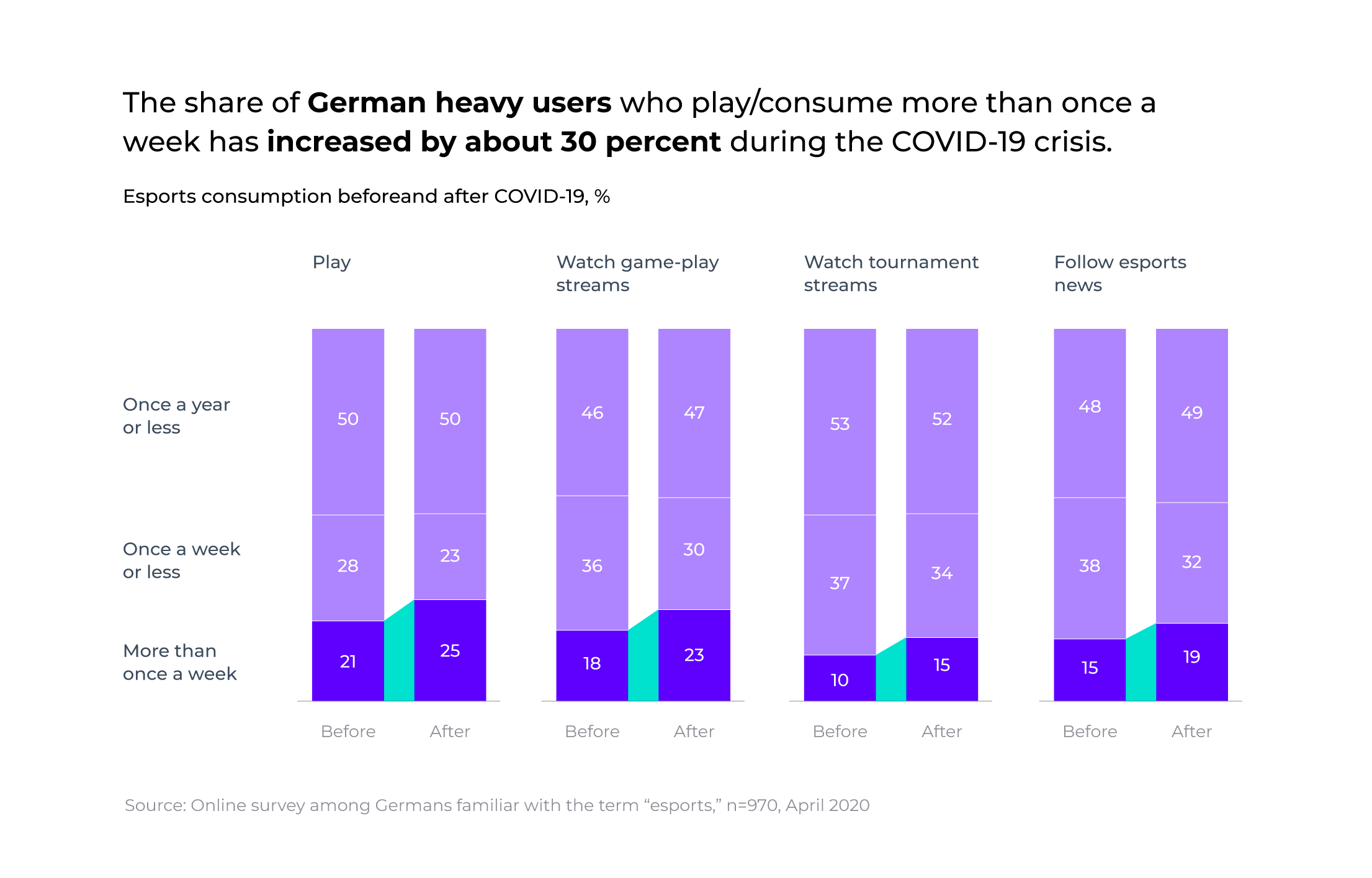 Esports, more than just a hype

By now, it’s clear that esports is not just some trend but a global industry here to stay. The industry is getting bigger with already considerable market size, surpassing many traditional sports in terms of both revenue and viewership. In 2019 the industry hit $950 million in revenue and is expected to reach $1.1 billion in 2020.

“If we look at the esports market there is a wave of professionalization. We see a way to be part of the first wave of innovators and early adopters, in such a way to be internationally recognized at a competitive level before everything is known and regulated. Seeing the numbers, budget, and spending in the esports market, this can become one of the biggest income-producing assets.” 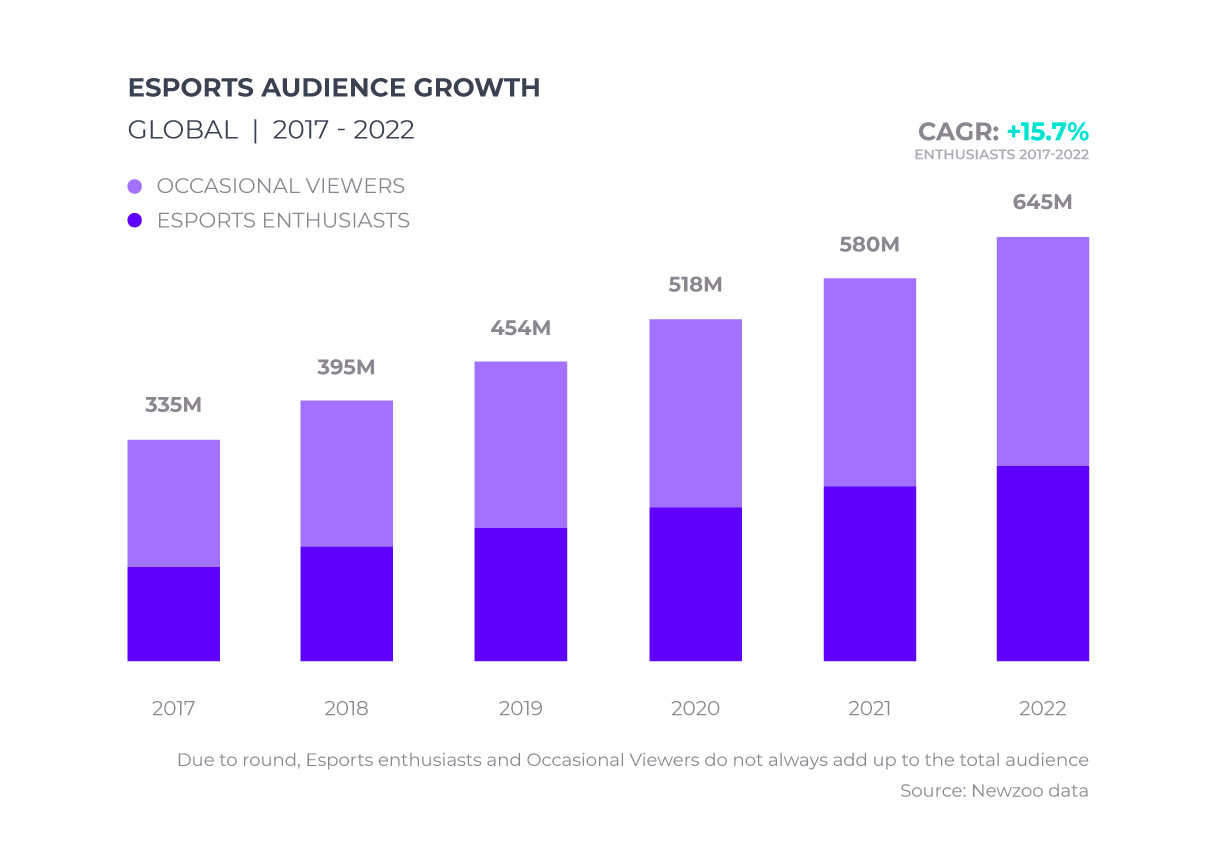 “What makes it particularly interesting to be in the esports market is the potential to reach a global fanbase. In football, we have limited coverage in the media. In esports, there are no boundaries. We can reach a global fanbase and create an international fan community around the club.”

Finally, the digital nature of the industry allows for some benefits over the traditional sports world. Sponsorship, for instance, can be hyper-targeted and comes with better-defined data than TV or billboard advertising. There are also many opportunities to work with small content creators or influencers to engage and scale your fanbase.

Why is KRC Genk moving into esports NOW?

KRC Genk has three objectives for entering the esports market:

A big strength in esports is the high audience participation and scalability. With the right technology, you can easily set up esports competitions between fans and improve fan engagement around the globe.

“First and foremost we want to create a fun experience around the game itself,” says Davy.

Secondly, it’s important for Genk to remain aligned with their values and vision. That’s why the club aims to participate in professional esports competitions with the mission of winning them.

“With our pro players, we want to work for results. We are going to participate in tournaments, win them, and inspire bigger audiences to become pro.”

Lastly, KRC Genk wants to bring new talent to the world. That’s why they will start an esports academy. This way they not only want to train professional players but also inspire others to join the esports community and become pros.

“As innovators, we took our time to prepare and pick the right moment to enter the market. We came with a plan to make it all work and win over the industry. By raising the bar for ourselves we got to implement a complete structure that will guarantee results.”

If your goal is to build a thriving community, you need to start with the players. That’s why KRC Genk’s main actions at the beginning will be organizing esports tournaments. If you create a fun experience for fans, they will connect with each other and help the community grow.

“StriveCloud was the perfect way to create a platform with a fun aspect, as well as include the academic part of the journey. The gaming tournament platform provides valuable data for our partners and allows us to build a global community around the individual accounts.” 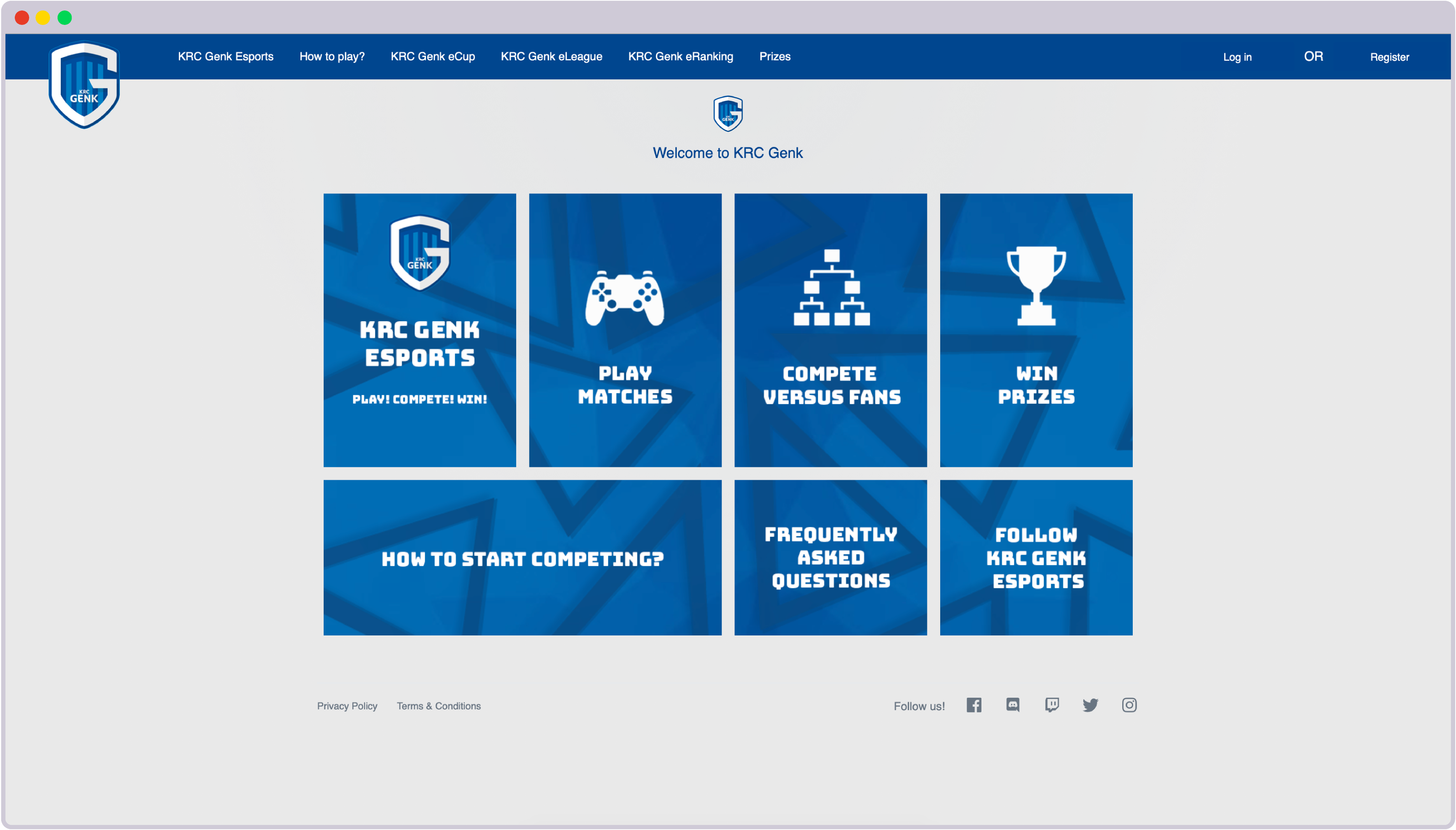 They will start off by organizing two types of esports events:

First off, the football club will hold offline events in an arena they are building inside the KRC Genk stadium. They will have fans, clients and potential sponsors come here to play esports on the gaming tournament platform set-up by StriveCloud.

Secondly, there will be a weekly Genk cup in which 252 players can join in online tournaments. KRC Genk will conveniently organize the brackets on the same tournament platform.

Of course, there are still other opportunities in StriveCloud technology, such as injecting gamification elements in the fanshop to increase sales.

“There is a lot of growth potential in the project. We will add new capabilities on the way. StriveCloud has a lot of added service, they think with you and come up with tons of ideas willing to make this project work”

Esports is no longer just an alternative. Clubs that want to stay on top simply need to get serious about getting into the industry and start building a highly engaged fan community. Fortunately, you don’t need to dive in blindly! Here’s the advice of a club that puts esports at the heart of their strategy:

“Seeing the rise of attention on esports, and the way gaming connects with fans digitally, we as a club chose to keep our identity close to esports. Therefore, we want to reach results, to win cups, and to have international players. Above all, we’re here to win.”

The club’s Partnership Manager went on to say you should stay close to your fans and organization when making your plan.

“First look at the way your club is organized, why you want to enter esports, create clear objectives, and definitely partner up with StriveCloud!”

In short, the official launch of the esports project will be in September. With an entirely new website, event calendar, and its own gaming tournament platform the club will be ready to welcome players to their tournaments and dive into this new and promising industry.

Table of Contents
1. A future proof business model for sports clubs
2. Fan engagement in esports continues to grow
3. Esports, more than just a hype
4. Why is KRC Genk moving into esports NOW?
5. Picking the right esports platform
Go to Top